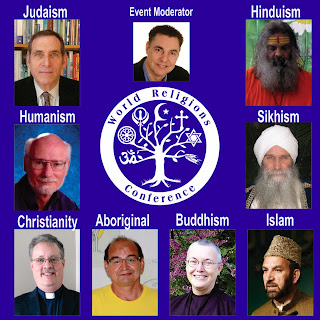 WATERLOO — It’s the mother of all questions.
The question has been asked since humans walked the earth and it’s still being contemplated today. For some, it’s a simple answer, while for others it remains ambiguous.
The question of Who is God? will be addressed at the 31st World Religions Conference at the Humanities Theatre at the University of Waterloo today. The daylong event is free and sponsored by the Ahmadiyya Muslim Jama’at of Canada.
Eight speakers from various faith perspectives will address the question and the characteristics of God. The faiths represented include aboriginal, atheism, Buddhism, Christianity, Hinduism, Islamism, Judaism and Sikh.
Conference co-ordinator Nabeel Rana said this year’s theme came from the Ahmadiyya Muslim Student’ Association at both local universities.
Although God may be interrupted differently, most mainstream religions agree there is only one God.
Swami Bhagwan Shanker of Hamilton said there is a misperception in society and within Hindu circles that there are many gods in Hinduism, but there is only one.
The Hindu god has numerous characteristics, which are reflected in the faith’s many idols. It’s a way of giving physical form to something indescribable, Shanker said.
“God resides in all things,’’ said the 53-year-old Hindu priest who oversees congregations in Hamilton and in Toronto.
Imam Muhammad Afzal Mirza from Mississauga says the majority of the world’s population believes in the existence of God.
Mirza said it’s not enough to say that God doesn’t exist because he cannot be seen, heard or touched.
There is scientific evidence about many things that exist but that we cannot perceive with our primary senses, he said. An example of this is how a seemingly empty room can be filled with a mixture of gases.
Mirza said most religions have a concept of God and his attributes at their core of their teachings. Religions provide detailed and clear descriptions of the being of God as compared to human reason, he said.
Allan Gould, a Toronto author who lectures frequently on Jewish topics, said Jews are not obsessed with theology. Instead, God is a given, he said.
“Judaism is a God-infused faith not a God-obsessed faith,’’ he said.
At the core of Judaism is whether one is deserving of God’s love and how to attain it, Gould said. The Jewish concept of charity is referred to as Tzedakah in Hebrew which means righteousness. To be righteous in the eyes of God, means giving to others, Gould said.
There is no choice, he said. By giving, the Jew is fulfilling the holy act of Tzedakah and being a righteous person and fulfilling God’s expectations.
“It’s what you do in your life that is important,’’ he said.
From the Christian perspective, Pastor Rick Pryce of St. Philip Lutheran Church in Kitchener said God is the other who came to earth in Jesus.
He embodied otherness, living up to no one’s expectations, playing by no one’s rules and questioning assumptions, Pryce said.
“God is a god of love who will sacrifice everything based on love and ultimately that love wins,’’ he said.
Pryce said God also comes to us through the other. Otherness can be different gender, race, nationality, economic status or criminal history. We see the face of Christ in others, he said.
“People who are different shake us up and challenge our priorities,’’ he said.
For aboriginal spiritual adviser Gerard Sagassige there is only one God. But the God some pray to isn’t the one he holds as the Creator.
“God isn’t assimilating,’’ said the cultural adviser at Healing of the Seven Generations in Kitchener.
“Religion is assimilating free spirit, free self and free belief,’’ said the 51-year-old Ojibwe of the Great Mississauga Nation.
“My God isn’t revengeful. My God isn’t dictatorship,’’ Sagassige said. “My God is no different than your God.’’
Other speakers at the event are:
•  Hari Nam Singh Khalsa of Toronto representing Sikhism
•  Doug Thomas of Elmira representing Humanism
•  Sister Thich nu Tinh Quang of Hamilton representing Buddhism
For more information on the conference, go to www.worldreligionsconference.org
lmonteiro@therecord.com